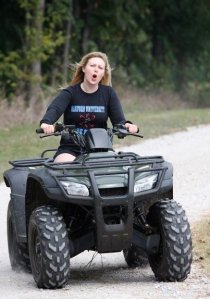 Blogland, meet Stephanie Norwood. There is truly no one like her.

Stephanie and I go way back (as in 8th grade), back when I thought I was too cool for school and she didn’t even know what “status” meant. Stephanie is one of those rare gems in this life that truly sees people as they are, and my friends, if you know her, you will be better for it.
I want to give a few examples from the past few months about why I love this woman so much, and let her life speak for you:
1. At the beginning of the summer, we wanted to have a housewarming party for all the friends we knew living in Indy. As we were going through people to invite, we came up with quite a short list–partly because it had been a while since we lived there, but the other part being that Erin and I both struggle with hospitality. Not Stephanie. The next day, she came in and said, “Hey! I met a few people at Starbucks today, they’re coming over tonight!” My immediate thought (I’m ashamed to admit) was, “What? Random people we don’t know? In our house? That’s weird.” This did not weird Steph out for a minute. So the night came, as did Steph’s new friends, and it turned out to be such a blast! Steph (unintentionally) totally put my people-skills (or lack thereof) to shame that night.
2. Right around the time that I was leaving Indy to go back to school in Cincinnati… I invited Steph on some errands that I needed to run before my departure. For some reason that still remains a mystery, we both started craving Taco Bell. . . of all things. Unfortunately, Taco Bell happens to be not even a mile from our house, so we gave into the craving. You know how it goes at fast-food restaurants–you drive up, look at the menu, casually order what you want and try not to yell too loud, and then pull up to the window and hope they got it right. Welp, in this particular instance, Steph and I were a little slow in ordering, and as a result, got yelled at through the Taco Bell speaker. Instead of getting mad, angry, or irritated, we both laughed so hard at the entire situation that I was almost in tears on our way out of Taco Bell. I ordered a Volcano Taco for no other reason than being flustered; it was the first thing I saw. Steph ordered a #3, without a clue as to what that meant, and as we left that day we added it the many wonderful stories of life.
3. Over Labor Day weekend, some friends of mine from Chapel Rock planned a big camping trip with a bunch of people from church. Stephanie, not knowing anyone, decided to go a day earlier than me. When she first told me that, my immediate thought was, “You’re not going to know anyone you’re camping with–are you alright with that?” Then I realized, we’re talking about Steph. She makes friends with wooden chairs. So she went, made 10 new friends in 3 hours, and by the time I got there the next day she was already apart of the village–totally loving life with all her new friends.
4. Alright, this is the last and most recent. Last night, my friend Erin sent me a text (Erin and Stephanie are roommates) that said, “Steph is totally going to our neighbors’ house to ask if they want to play monopoly because I dared her to… I can’t stop laughing. I think we are about to be known as the creeper neighbors!” When I asked Steph how it went, she replied, “This is the second time they have not been weirded out by my forced friendships!” That girl truly knows no bounds and we would all be better at loving people if we lived like her.
I hope that someday I can learn that kind of love–the one that would rather reach out than shy away. To all of my reluctant friends out there: I pray that if you do not know Stephanie, you know someone like her that will push you beyond your own comfort.

2 thoughts on “Ode to Stephanie Norwood”